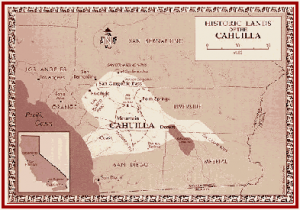 The Ramona Band of Cahuilla has a rich and vibrant history. Cahuilla (pronounced Kah-we-ah) translates to “masters” or “powerful one,” and it is estimated that Cahuilla aboriginal tribes inhabited an area including what is today the Anza Valley more than two thousand years ago.

The Ramona Reservation, home to the Ramona Band of Cahuilla, was established in 1893 in the Sauppalpisa Territory and was originally settled by the Apapatcem Clan, who were known as the “Medicine People.” Ramona Band tribal members are direct descendants of the Apapatchem Clan.

Up until about 1580 the Anza Valley was in the proximity of a larger body of inland water known as Lake Cahuilla. When that inland lake evaporated it increased the desert character of the Anza Valley. These climatic and cultural factors can be seen as having exerted a unique influence on the early European settlers of the Anza Valley.

As a result of its history and relative isolation for hundreds of years, Anza is unlike many areas in California. The Cahuilla encountered Europeans only as late as 1774 when a Spanish expedition in search of an overland route from Sonora Arizona to Alta California made its way from Tubac Sonora through the valley to Monterey Alta California.

That expedition was led by Juan Bautista de Anza in whose honor the valley was renamed from Cahuilla Valley to Anza Valley on September 16, 1926. During the 1800’s, settlements included ranchers, a limited number of miners, and honey producers. The mid to late 1800’s witnessed moderate population and above average economic prosperity for this isolated community.

Gathering places, village sites, and ceremonial sites are prevalent throughout the area and the Ramona Band’s desire to protect and preserve such sites, located on and off the Reservation, are integral to the continued survival of the Band.